A School, of one single room, was purpose built in 1868 for Mrs. Georgina Craven of Brockhampton Park, to educate the children of her estate workers.  It closed when she died but was re-opened 7 years later in 1887 as a Library by her husband Charles G.C. Craven.  It became known as the Reading Room when daily papers were introduced.  It then became a Club for men only to be known as the Brockhampton Institute.  Later women were allowed to join, but only allowed to use it in the daytime.

Col. Fairfax Rhodes became the owner of Brockhampton Park and when his only son John was killed in 1902 in the South African War, Col. Rhodes extended the building by adding the Hall to the Reading Room, including the white pargetted plaque, to his son’s memory.  In 1909 Col. Rhodes added the Cottage to accommodate the  hall caretaker and his family, who lived there rent-free.  This arrangement continued until 1991 when the then Hall Management Committee decided to dispense with the services of a caretaker.  The ex-caretaker became a tenant and continued to live in the cottage paying a monthly rent until 1999. The cottage is now let on a commercial basis and the rent greatly benefits the hall’s funds. 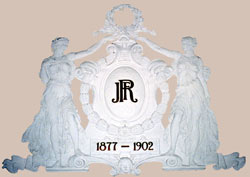 White Pargetted Plaque to the memory of John Rhodes

Col. Rhodes died in 1928 leaving the Parish Council as Trustees for the Hall.  When the Rhodes family sold their properties and left the village in 1934, they left the Rhodes Hall and Reading Room to the village under the guidance of the  Parish Council as the Trustees.  In accordance with the will dated 18th. October 1917, a Foundation was formed, its purpose being “the provision and maintenance of a village hall for the use of the inhabitants of Brockhampton, Charlton Abbots and Sevenhampton and the neighbourhood without distinction of political, religious or other opinions, including use for meetings, lectures and classes and for other forms of recreation and leisure-time occupation with the object of improving the conditions of life for the said inhabitants”.

The Council decided at a meeting that in future the building would be known as “the Rhodes Memorial Hall” and a committee was elected to manage the Hall.

In 1968 a Scheme creating a Charity was made (Charity No. 301476) and the members of the Management Committee became Trustees of this Charity with ultimate responsibility for the administration and management of the Hall.

The Parish Council is a custodian trustee but has no role as such in the charity’s management.