As the ticket had not been sold the £50 prize will be held over to the next draw which will take place on Friday 27th November 2020.

The total prize money available for that draw will be £100
Click here for information about the Lottery.

From the Chairman of the Trustees

You will all be aware that the Hall has been closed to users since the beginning of the lockdown in March. The Management Committee had hoped that by now the original restrictions would have been eased as a result of which the Hall could have been re-opened, albeit on a restricted basis.

However, the latest restrictions (including notably the “Rule of Six”), which we are told are likely to remain in force until the end of March, have made this impracticable for the foreseeable future.

Under the trust deed governing the management of the Hall, the Management Committee is required to call an Annual Meeting which is open to the public and which is normally held in September. This clearly has not been possible this year.

The business to be transacted at such Annual Meeting is largely formal – the approval of the audited accounts to the previous 31 May, the election of up to three Trustees to serve on the Committee alongside the Trustees nominated by the regular users of the Hall and the election from those Trustees of a Chairman and Treasurer for the forthcoming year. We currently have two elected Trustees, Linda Fergusson-Wood and John Bashford, I am the Chairman and Linda the Treasurer.

There is accordingly a vacancy for a third elected Trustee. If anyone wishes to put themselves forward for this position, I would ask them to contact myself in the first instance and I would be happy to explain to them what this would entail.

Finally, despite the lockdown the Village Hall Lottery continues to operate and remains an important source of funds for us. If you do not already subscribe, details can be found on the village web site under the section devoted to the Hall. 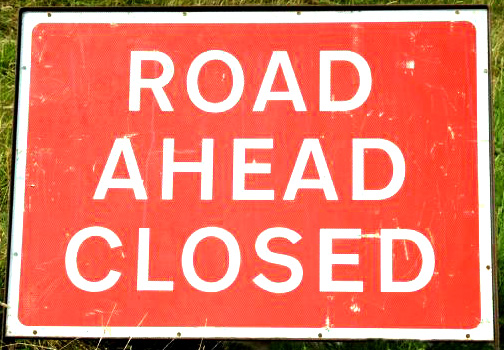 There has been a notification that the Road through The Quarry, Brockhampton will be closed between the 29th October 2020 and 4th November 2020,

This is to allow contractors, working on behalf of Thames Water, to carry out the installation of a new water service.

The extent of the closure would appear to be from by ‘Coppice Bank’ to a point somewhere above ‘Elsdown View’. See map (PDF).

If you require any further information regarding this closure, please contact Gloucestershire Highways on 08000 514514. 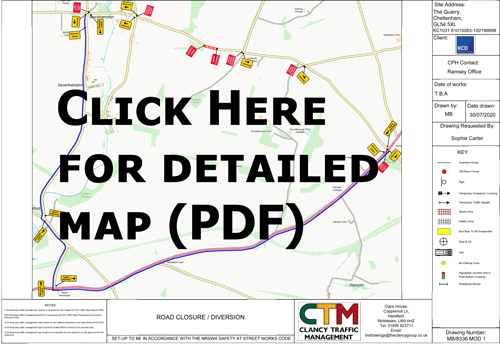 The road at Perch Pool (which is the very bottom of the hill in Brockhampton, where the road crosses the River Coln) will be closed to through traffic from 12th to 16th October.

This will be necessary to allow work to be carried out to the bridge and because of size of machinery being used.

The following week from 18th to 23rd October further work will take place but the traffic will be managed using STOP/GO boards or traffic lights.

The official diversion route is shown on the map below but it is recognised that residents will know and use shorter routes. 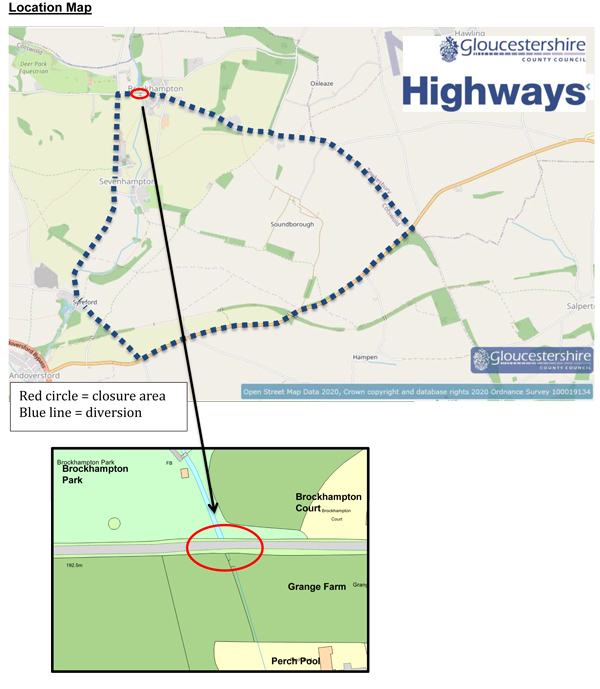 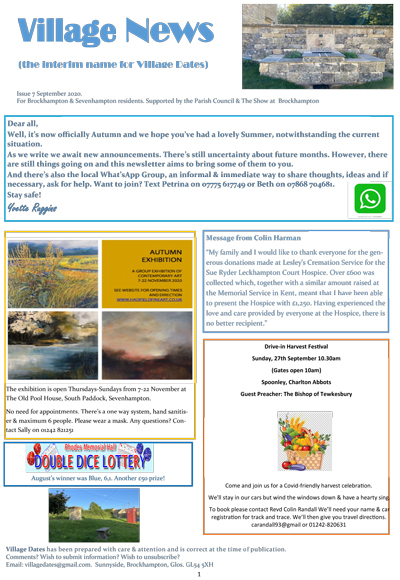 Click here or below for the latest edition of Village News (Dates). This gives the full results from the (Virtual) Show at Brockhampton 2020 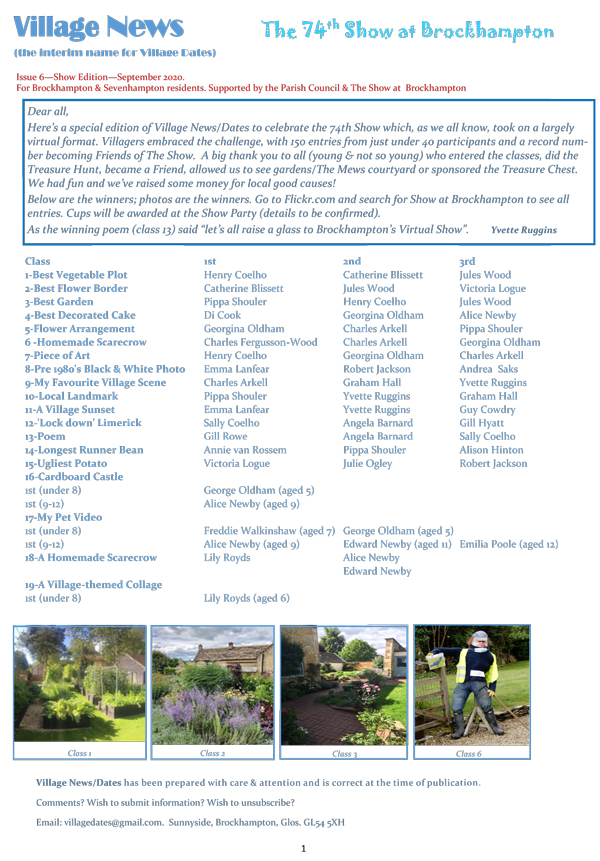 and a Treasure Hunt.

This will take place on Saturday 29th August 2020.

The lucky winner won £100. The next draw will take place on Friday 28th August. The prize money available for that draw is ££50.

Erection of first floor extension and excavation of the kitchen floor, replacement windows and repairs to the external walls and roof
For full details of this click here for the CDC planning portal

(There is also a Listed Building consent application for the same plan, Click here for this.)

The winning ticket in the June 2020 Double Dice Lottery was

Prize money available for that draw is £100